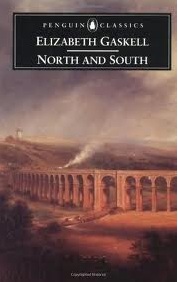 If you are a fan of old English romances, then this book is definitely one you should check out. Take everything you love about Jane Austen’s novels, add in even stronger male characters and a commentary on the life of the working man, and you have Elizabeth Gaskell’s North and South.

The heroine of the story is Margaret Hale, a headstrong and yet caring young woman who is torn from her lovely and sedate life in the South of England and tossed into the busy and noisy North by her father’s religious convictions. After befriending a mill worker’s dying daughter and making her way through the coal-covered streets of Milton, Margaret catches the eye of mill master Mr. Thornton. He falls for her and proposes, but is rejected.

One thing after another throws them together, and eventually they both feel the attraction growing between them, though misunderstandings and secrets still keep them apart. When unforeseen occurrences send Margaret back to London, Mr. Thornton fears he shall never see her again. However the ending of the book satisfies the romantic in us all.

This wonderful book is also a great mini-series in the BBC adaptation. The actor that plays Mr. Thornton is the very sexy Richard Armitage, and even the mill worker is an actor you might recognize from Downton Abby. The beautiful scenery and great acting make the BBC adaptation a must see accompaniment to this must read book!

Excerpt from North and South by Elizabeth Gaskell:

‘Is there neces­sity for call­ing it a bat­tle between the two classes?’ asked Mr. Hale. ‘I know, from your using the term, it is one which gives a true idea of the real state of things to your mind.’

‘It is true; and I believe it to be as much a neces­sity as that pru­dent wis­dom and good con­duct are always opposed to, and doing bat­tle with igno­rance and improv­i­dence. It is one of the great beau­ties of our sys­tem, that a working-man may raise him­self into the power and posi­tion of a mas­ter by his own exer­tions and behav­iour; that, in fact, every one who rules him­self to decency and sobri­ety of con­duct, and atten­tion to his duties, comes over to our ranks; it may not be always as a mas­ter, but as an over-looker, a cashier, a book-keeper, a clerk, one on the side of author­ity and order.’

‘You con­sider all who are unsuc­cess­ful in rais­ing them­selves in the world, from what­ever cause, as your ene­mies, then, if I under-stand you rightly,’ said Margaret’ in a clear, cold voice. As their own ene­mies, cer­tainly,’ said he, quickly, not a lit­tle piqued by the haughty dis­ap­proval her form of expres­sion and tone of speak­ing implied.

But, in a moment, his straight­for­ward hon­esty made him feel that his words were but a poor and
quib­bling answer to what she had said; and, be she as scorn­ful as she liked, it was a duty he owed to him­self to explain, as truly as he could, what he did mean. Yet it was very dif­fi­cult to
sep­a­rate her inter­pre­ta­tion, and keep it dis­tinct from his mean­ing. He could best have illus­trated what he wanted to say by telling them some­thing of his own life; but was it not too per­sonal a sub­ject to speak about to strangers? Still, it was the sim­ple straight­for­ward way of explain­ing his mean­ing; so, putting aside the touch of shy­ness that brought a momen­tary flush of colour into his dark cheek, he said:

‘I am not speak­ing with­out book. Sixteen years ago, my father died under very mis­er­able cir­cum­stances. I was taken from school, and had to become a man (as well as I could) in a few days. I had such a mother as few are blest with; a woman of strong power, and firm resolve. We went into a small coun­try town, where liv­ing was cheaper than in Milton, and where I got employ­ment in a draper’s shop (a cap­i­tal place, by the way, for obtain­ing a knowl­edge of goods). Week by week our income came to fif­teen shillings, out of which three peo­ple had to be kept. My mother man­aged so that I
put by three out of these fif­teen shillings reg­u­larly. This made the begin­ning; this taught me self-denial. Now that I am able to afford my mother such com­forts as her age, rather than her own
wish, requires, I thank her silently on each occa­sion for the early train­ing she gave me. Now when I feel that in my own case it is no good luck, nor merit, nor talent,–but sim­ply the habits of life which taught me to despise indul­gences not thor­oughly earned,–indeed, never to think twice about them,–I believe that this suf­fer­ing, which Miss Hale says is impressed on the coun­te­nances of the peo­ple of Milton, is but the nat­ural pun­ish­ment of dishonestly-enjoyed plea­sure, at some for­mer period of their lives. I do not look on self-indulgent, sen­sual peo­ple as wor­thy of my hatred; I sim­ply look upon them with con­tempt for their poor­ness of character.’

‘But you have had the rudi­ments of a good edu­ca­tion,’ remarked Mr. Hale. ‘The quick zest with which you are now read­ing Homer, shows me that you do not come to it as an unknown book; you have read it before, and are only recall­ing your old knowledge.’

‘That is true,–I had blun­dered along it at school; I dare say, I was even con­sid­ered a pretty fair clas­sic in those days, though my Latin and Greek have slipt away from me since. But I ask you, what prepa­ra­tion they were for such a life as I had to lead? None at all. Utterly none at all. On the point of edu­ca­tion, any man who can read and write starts fair with me in the amount of really use­ful knowl­edge that I had at that time.’

‘Well! I don’t agree with you. But there I am per­haps some­what of a pedant. Did not the rec­ol­lec­tion of the heroic sim­plic­ity of the Homeric life nerve you up?’

‘Not one bit!’ exclaimed Mr. Thornton, laugh­ing. ‘I was too busy to think about any dead peo­ple, with the liv­ing press­ing along­side of me, neck to neck, in the strug­gle for bread. Now that I have my mother safe in the quiet peace that becomes her age, and duly rewards her for­mer exer­tions, I can turn to all that old nar­ra­tion and thor­oughly enjoy it.’

Heather Smith is an ex-nanny. Passionate about thought leadership and writing, Heather regularly contributes to various career, social media, public relations, branding, and parenting blogs/websites. She also provides value to hire a nanny by giving advice on site design as well as the features and functionality to provide more and more value to nannies and families across the U.S. and Canada. She can be available at H.smith7295 [at] gmail.com.