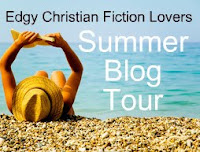 our focused on what "edgy" is and why it's a good thing. What I remember from last year is that the term edgy is actually rather broad, basically referring to books in genres or about subject matter from which publishers of Mainstream Christian fiction tend to shy away. This year for the tour authors were to choose four Edgy Christian Fiction books to highlight -- two of our own and two by a different author(s). I wanted to tie last year's theme together with the current one, and decided in my blog post to focus on bother genres and subject matter that fall into the category of "edgy". That made my choice of books easy.

The two books I chose that are by another author, the lovely and talented Jennifer Hartz, are the first two in a series. The only reason I'm not including the third is that it isn't out yet. I'll buy it on the day it releases. These books are Christian Fantasy, or speculative fiction, and they are amazing! The titles are Future Savior Book One: Conception and Future Savior Book Two: Resurrection. My review of both books could be summed up in one word: WOW!!! But I figure readers might like a little more of a teaser than that.

Here's my review for Conception:
Christina's ordinary life as a single thirty-year-old school teacher takes a twist when she is unexplainably transported from current day Pittsburgh to a mysterious

place called Meric. There, she discovers great wonders; from the beauty of the land, to the secret of her birth and the magical powers she unknowingly possesses. She also learns why a pair of mesmerizing blue eyes has followed her throughout her life.

However, not all is glorious in the land of Meric. A dark evil threatens its people, an evil that thirty years earlier killed Christina's father and drove her into hiding before she was even born. Now that she has returned, Christina must fulfill her destiny or Meric will be doomed under evil's rule.

I can't believe this book was Jennifer Hartz's debut novel. It was pure adventure from start to finish. Jennifer masterfully weaves humor, mystery, action, and romance into a fantastic tale. The pacing is just perfect, dropping hints here and there as deep mysteries are unveiled. At the same time we get to know a host of delightful, well-rounded characters, who I grew to love. The tension builds and builds and I was literally holding my breath at the end.

This book is the first in a trilogy, and I will definitely get the next on the first day it releases. If you enjoy fantasy with Inspirational elements (Lord of the Rings, Chronicles of Narnia, Kingdom of Arnhem) then you'll love this. Buy it.

The second book, Resurrection, picks up right where the first book left off. It's hard inc

lude a review in this blog post without giving away spoilers to the first book, but I'll give it a try.

After dying, Christina awakens to discover she's seventeen. She struggles to fill in the pieces of what happened on Meric, and is immediately comfronted with a dilemma: if you tell someone their future, do you risk altering it by interfering with their choice?

Once again Christina finds herself whisked back into the land of Meric, into a body that is fully healed. She and her companions are confronted with this same dilemma, over and over as they fight the evil Leticia and her mounting forces. As prophesy unfolds, secrets of betrayal are revealed. The future of Meric rests in the balance of trust and timing.

This book has everything: time travel, flying, sword fights, giants, teleporting, telekinesis, mind control and did I mention that it's also a beautiful story of enduring love and friendship... and oh so romantic. I loved the play between all of the characters, but especially Christina and Shaw. In my review of the previous book I mentioned that Lord of the Rings readers and Narnia readers would love this series and this book drives that point home. It has all of the action of LOTR and all the allegory of Narnia, and dare I say a little more. The book isn't a comedy, though there are plenty of humorous moments, but there's an element to it that reminds me of the relationship between The movie Oh Brother Where Are Thou and The Odyssey. If that's piqued your curiosity, then read it. You won't be disappointed. Buy it.

For more about Jennifer Hartz.

The two books of mine that I chose to highlight are also a series. They are my debut novel, No Other, and it's sequel, In All Things. The reason that I chose these two is that I feel there is a tremendous human element to them of which we Christians sometimes don't like to admit we struggle with. Pride. We struggle and make mistakes just like everyone, but since we're Christians and supposed to have it all together (pride), we don't want anyone to know (more pride). Therefore we keep it to ourselves, thinking we can handle it on our own(still more pride) and thus comes the downfall. The beautiful part to the story is that once we get over ourselves, we find is redemption.

To highlight my two books I decided to choose a couple of my favorite reviews by readers.

No Other by Shawna K. Williams is a beautifully written romance set in post WWII Ame

rica. Anti-German sentiment is prevalent, and one family in particular has had to endure much hardship because if it. Now that the war is over, twenty year old Jake must brave a regular classroom in order to finish his schooling. This would have been bad enough, but he wasn't expecting to fall in love with his teacher! It's a dilemma that will test his will power and his faith.

Jake and Meri's romance is gently woven, despite their very human struggles with temptation. Williams treats every aspect of their relationship with honesty and care. There is nothing shocking or untoward for those readers of a more delicate bent, but she does not sugar coat the realities of life either. It is a refreshing look at two people in love during an era that was still naïve in many ways, but also quite hypocritically hardened.

Especially enlightening was the way Williams was able to weave the travesty of WWII internment camps into the story - not something that most proud Americans like to celebrate, but part of US history none the less. Even though this travesty is exposed, Williams purpose throughout is to gently lead the reader on a path toward forgiveness - a recurring theme that seems to be the story's foundation.

No Other is a lovely and satisfying read - not too difficult with just the right amount of poignancy to keep the reader going. Williams herself aptly describes it as "Grace Inspired". I would recommend this book to readers looking for a romance that is somewhat different than the norm, yet still delivers on the `romance-meter'.
-- Tracy Kraus
Buy it

In this sequel to "No Other", author Shawna Williams brings back all of our favorite ch

aracters, and a few that probably weren't on our favorite list. The setting for "In All Things" is about 10 years later in Hollywood, where Jakob and Meri have followed their dream, well Meri's dream. Meri, known in Hollywood as Meredith Louis, is fulfilling her dream of being an actress. She is working for Majestic Studios when the book starts. Majestic Studios is responsible for putting Jakob through school to become an architect. He has established himself as a fairly upscale builder. Shortly after the story begins, Meri quits Majestic Studios to go out on her own, to be able to take on more diverse rolls and to make a name for herself.

It's coming up on the Christmas holidays and Jakob and Meri take some time off to travel back home where Meri hopes to reconcile with her parents. They have not spoken in about 10 years, before Jakob and Meri left their home town. They both have brought inner turmoil and insecurities to their marriage. Can Jakob learn to step aside and let God have control? Can Meri realize that she may always have had what she's been looking for, right before her?

I loved this book! I really love Shawna's writing style. She can pull you into the story, where you almost feel like you are there! Her characters are not perfect. Neither are we. They have the same feelings, insecurities, flaws, etc. that each one of us has. That is what makes them so real. My heart went out to Meri. She longed for something she had already been gifted with. She had to overcome many things to get where she is at the end of the book. I especially loved the scripture that Shawna picked for this book, "And we know that all things work together for good to them that love God, to them who are the called according to his purpose" (Romans 8:28).

I gave this book 5 stars. It deserves it! Read "No Other" first. It will let you meet the characters and know some of the background of the families of Jakob and Meri. Then read "In All Things" and follow the characters you've come to love!
-- Janet Thompson
Buy it

The third book in this series, The Good Fight, is schedule for release Nov. 1st 2011 by Desert Breeze Publishing.

For more about Shawna K. Williams.

God bless, everyone. Have a great remainder of the summer!
Posted by Shawna K. Williams at 10:03 PM 1 comment: