Do you remember what you were doing on New Year's Eve 12 years ago?
I do!
Happy 12th Birthday to my baby. Love you, Kaylee!
Posted by Shawna K. Williams at 10:42 PM 2 comments:

The Magic of Christmas by Shawna K. Williams

When my youngest daughter was nine she approached me a couple of weeks before Christmas and asked, "Is Santa Claus really real?"

The way she narrowed her eyes and cocked her little head to the side gave away her skepticism, and I knew the time for fairy tales had come to an end. Just to make sure, my response was, "Do you really want to know?"

That was all I had to say.

I was ill-prepared for what followed. Having seen her young mind arranging the pieces I figured she'd accept the news with little consequence; but instead, my baby went on a two day mourn-fest lamenting the passing of her childhood.

"There's no magic anymore!" she wailed into the late hours of the night.

Why oh why couldn't this revelation about Santa Claus have occurred to her during July, or some other month when Christmas was still far enough away that she'd have time to adjust.

After the second day, when her grief began to subside, I sat her on my knee and explained the wonder of The Christmas Spirit; how it was real, far more magical than Santa Claus, and how now she wasn't just a recipient of it, but part of its making. Part of the magic.

No longer did we have to prepare her gifts in secrecy. Or her brother's and sister's for that matter. Now she was allowed to participate in all of the little behind-the-scene Christmas activities. When we purchased gifts for families in need and dropped them off at the doorstep, she could be a part; be Santa Claus. When we took baskets to our neighbors, she could be the one to deliver. Instead of focusing on what she wanted for Christmas, she could think of ways to spread the cheer to others.

At first, she seemed less than impressed with my explanation, but the next day her little hands went to work making potholders for the Christmas baskets we delivered to neighbors. The day after that, she realized that she could participate in the family tradition of sneaking small gifts under the miniature trees we each kept in our rooms the week before Christmas. So, she made a snowman out of craft foam for her daddy and a beaded necklace for me. By the end of the week she'd created a number of precious contributions for family, friends and neighbors.

On the night we delivered Christmas baskets, we approached a house that was dark and lifeless. It would have seemed abandoned if the dim glow from a television set hadn't hinted otherwise.

Icicle lights hung from the porch. However, I knew from previous visits to our elderly neighbor that these were a constant feature, remaining intact and unlit year round.

We knocked on the door several times and had almost decided to leave the basket and return to the warmth of the car when we heard the sound of the door unlocking from the other side.

Mrs. Burden's crinkled eyes peeked through the slit, and then she opened the door wide, appearing a bit confused. My daughter's arms extended in offering and Mrs. Burden squinted, then smiled as her eyes affixed to the gift basket.

"My oh my!" she exclaimed before inviting us in. She quickly turned on the lights to the den and kitchen area, and asked us to take a seat as her feeble hands fingered through the basket of goodies. "Mervin, look at this," she said.

"Huh?" was his reply from the recliner in the corner. But he slowly pushed himself from the chair and shuffled over to see what his wife was so excited about. "Well I'll be…would ya look at that," he said, peering down through his coke-bottle bifocals.

Before long the television was off, the radio tuned to Christmas music and we were all enjoying a cup of hot cocoa or cider made from the boxes of instant mix stashed away in the gift basket.

Eventually we had to excuse ourselves since we still had a couple of more deliveries. So we said our farewells and wished each other a Merry Christmas. As they closed the door, the sight of their smiling faces warmed my heart.

But then, as we walked from their porch to the car, something curious happened. Those icicle lights, that were a year round fixture and always unlit, flickered on. My littlest daughter stopped cold at the illumination and turned where she stood, wide-eyed in amazement. Then she looked at me with a joyful smile. "We shared the Spirit of Christmas!"

She erupted in a giggle and grabbed my hand. "The magic is real!"
Posted by Shawna K. Williams at 11:47 PM 4 comments:

Wanna Win These! Plus More Stuff 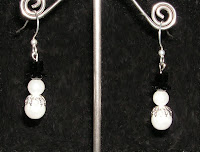 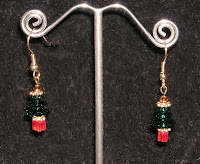 It's not too late to get in on DBP's scavenger hunt. Prizes, including books, cookies, candy tins, canvas bags and gift certificates (ranging from $10-$50) will be given away through the 18th. These earrings (one of the prizes) are made with Swarovski Crystal so they catch light beautifully, but they aren't too photogenic unless you have a great camera.

If you decide to get in on the action, start here. http://desertbreezepublishing.blogspot.com/2009/11/welcome-to-desert-breeze-scavenger-hunt.html
Each question will lead you to another blog. You're about a week behind so you'll need to scroll down some of the posts to find the question. And remember, you must sign up at DBP Connections to participate.
http://groups.yahoo.com/group/Desert_Breeze_Publishing_Connections/?yguid=291104712
I hope you had no problem finding the answer to the question that led you here. It's from one of my favorite stories, and was the inspiration for the name of my blog. But you gotta be more specific than Oldsmobile.
Now, here's my question for the scavenger hunt.
What were the two alternative titles for the Love Bites series?
Find the answer at http://themorgandiaries.blogspot.com/?zx=a3d4399e4d6ae3a9
I've tried to fix this three times now, but if a content warning sign comes up when you click on this link, I assure you, Jay's blog is safe to enter.
Good Luck!
Posted by Shawna K. Williams at 5:53 PM No comments: