I'm doing a giveaway on Goodreads for three copies of NO OTHER. Here's the button to enter.

See the giveaway details
at Goodreads.

I'm excited to introduce Jillian Chantal today and her book, The Gambler. I had the privilege of meeting Jillian last week at RT. It's a real treat to be able to host her so soon after that meeting.

Thanks to Shawna for inviting me to be here today on her blog.  I love to hang out with my Desert Breeze Publishing house friends. We are a pretty tight group of writers and have great fun talking about books and ideas.  I recently met Shawna in person and she's adorable and a wonderful person to be around.  I'm visiting today to chat a little bit about my newest release, The Gambler.  This is the first book in a series of three which will be released over the next year, with this book being based in 1937.

The Gambler is the story of Dirk McSwain, a man who has been responsible for the care of his mother and younger brother since the death of his father.  He has a talent for playing cards and winning so he's made his living with that skill since he had to leave his legal apprenticeship once he had dependents as his apprenticeship didn't pay enough to support a family.

Dirk meets three Irish sisters on the ocean liner, the RMS Queen Mary. Two are twins, Lilith and Eve and the third is their older sister, Eden.  Since her sisters were born, Eden has lived in their shadow as they are beauties. During the course of the ocean voyage, Dirk is accused of cheating at cards.  The next day, the accuser dies.

Eden and Dirk team up to figure out what happened to the man and if his death was from natural causes or something more sinister.  Along the way, Dirk helps Eden to see that she is a valuable person and has a lot to offer to the world.

As I wrote this story, I realized about two thirds of the way through it that it was actually a variation on the Cinderella theme. I didn't start out with that in my mind, but that's where this story went as I created it. I hope those who read it find the parallels like I did. 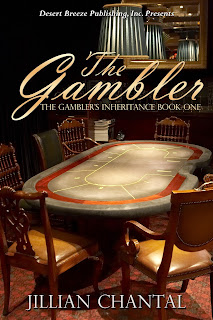 Thanks again to Shawna for having me here. It was fun!

Come by my blog sometime to say hello.  My website is http://www.jillianchantal.com